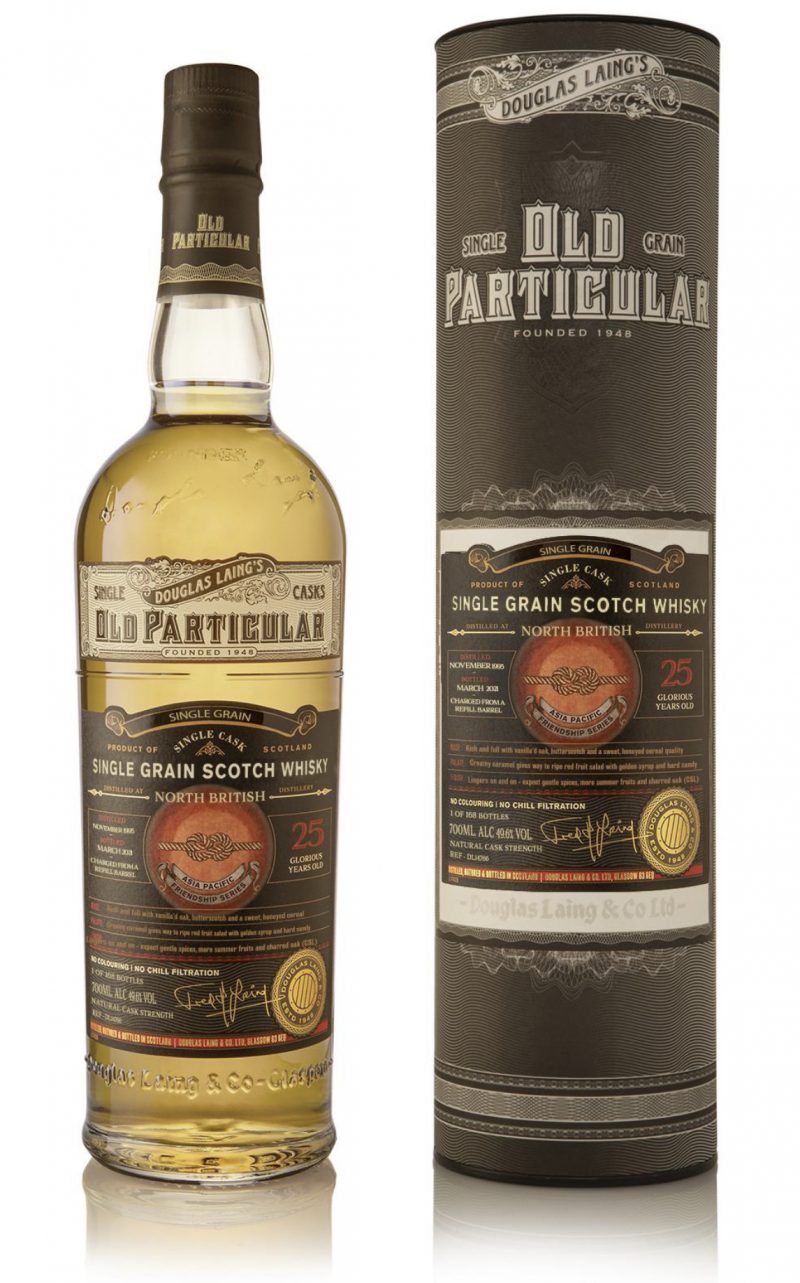 Malt doesn’t pay us with money. But, ultimately, contributing to Malt pays in other ways.

In an era where form is valued over substance, it’s way more common for the brands with big marketing budgets to hand out promotional material to influencers who are, often, not really into what they’re promoting. Luckily, there are still those who value substance over form.

It’s encouraging to get recognized by a niche brand you’re into without having to sell your soul. This situation also has a cherry on top, as it was Douglas Laing’s APAC Sales Manager, Paul Wang, who reached out to me. He said he noticed my positive but honest reviews of their products. So, he offered to send me samples from their Old Particular “Asia Pacific Friendship Series”.

Paul isn’t just someone who works for a whisky company. He’s a Keeper of the Quaich. I know that group is sometimes seen as some sort of a boys’ club by the big brands. But there’s still a huge amount of credibility in that group due to who belongs there.

Also, coming from a region that’s usually behind the west in terms of alcohol trends and new brands, it’s nice to see the more niche and quality brands dedicating a series of releases just for Asia.

I was sent six samples in total. All of them came from single casks. But, just like other Old Particular releases, they were not necessarily bottled at cask strength. All of these are also non-chill filtered and have no added coloring.

My sequence of reviewing these was recommended by Paul, for various reasons (such as alcohol taxes in Asia being over the place). Since there isn’t a one-stop shop for spirits in Asia, I won’t be able to provide the prices. Apologies for that.

On the nose: An odd mix of pronounced toasted coconut chips with light aromas of banana chips, ripe banana peel, waxy butterscotch, and old soggy Frosted Flakes. The ethanol bite switches from the start to somewhere in the middle. I also get really subtle but stretched out lemongrass aromas in between the butterscotch and bananas.

In the mouth: An odd mix of incoherent and jumbled up flavors. For some reason, this makes me think of Thailand or Vietnam. The main body is steamed sponge cake (Ma Lai Gao) with a herbaceous taste and oily texture I can’t pinpoint. Imagine that but flavored with pandan and lemongrass. In between and after are flashes of banana chips, diluted honey syrup and white dragon fruit.

A memorable experience for my experience with North British Single Grain. I expected this to be similar to the Old Particular Cameronbridge 27 year, but this just came off as weirdly tasty with a loooong finish.

I don’t know if the tasting panel for this cask selected this for the very Asian Ma Lai Gao taste, but I hope they did, because it would be genius. This is something I’ve never tasted in any of the whiskies I’ve had. Now I’m left wondering if this is a consistent profile for the distillery. Aside from that, there’s not really much depth to this. Regardless, a good whisky to have if you like the tasting notes and are after age statements. 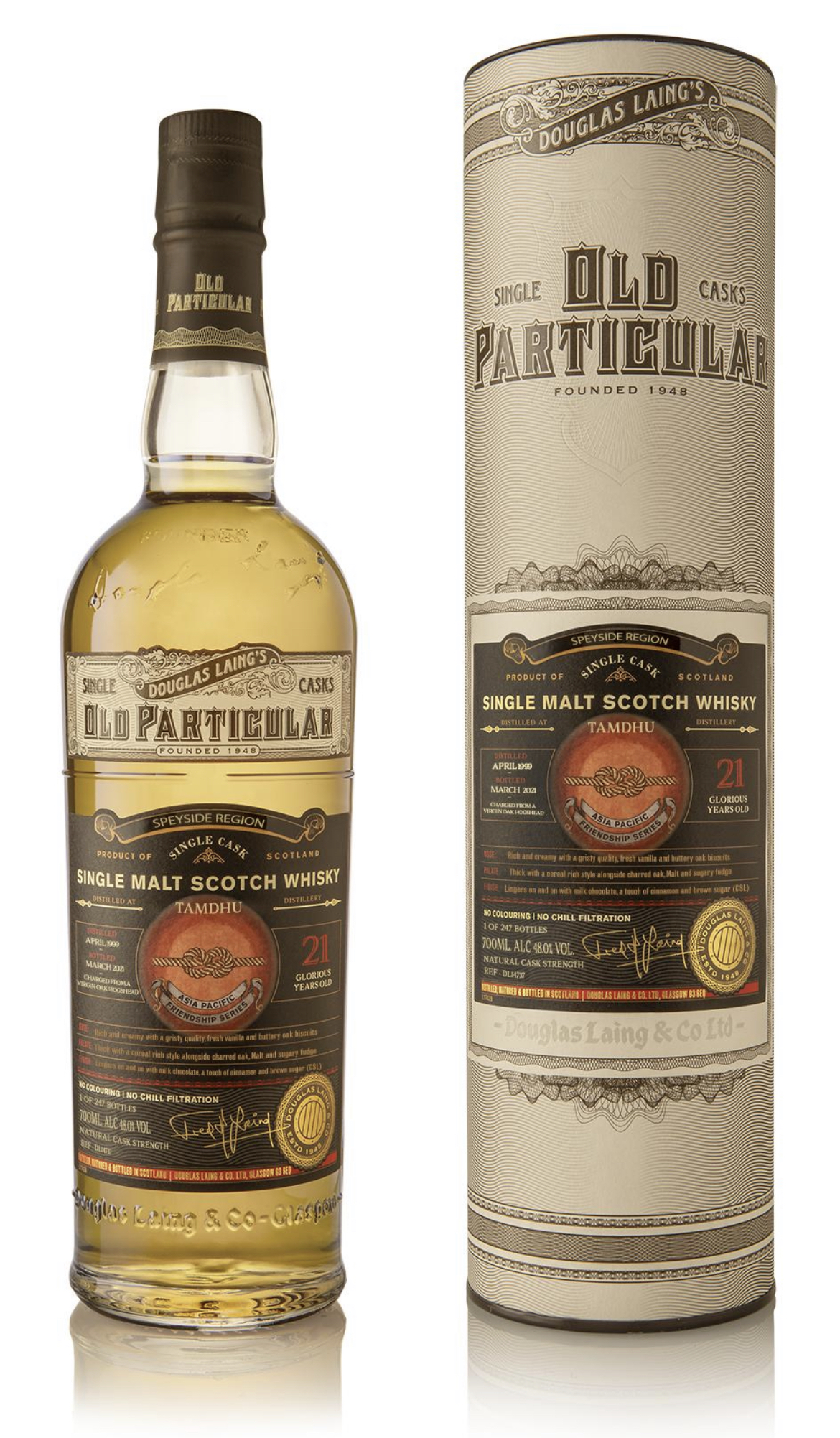 On the nose: Another fruit bomb. A bit sharp on the nose, but it quickly gives way to a bouquet of fruits. In a random order, I get medium bursts aromas of dried apricots, tangerine, lemon peel, lemon-flavored NERDS candy, ripe plums, Mandarin orange peel, Fuji apples, and cherries. While occurring in short bursts, these aromas compiled make the nose seem longer. In between these is a subtle aroma of honey that comes and goes. After the bouquet are fluctuating and stretched out aromas of lanzones, tangy vanilla, canned peaches with cream and passionfruit.

In the mouth: Still very fruity. But the different fruit notes aren’t as quick to burst as on the nose. I get medium and slightly longer lasting tastes of canned peaches with cream, lanzones, fuji apples, ripe plums, and sapodilla. There are light and brief tastes of vanilla and shaved Taiwanese peanut brittle. After are just as light but longer lasting tastes of honeydew melon, cantaloupe, honey, tangerine, cherries, and Mandarin oranges. The canned peaches with cream show up again with dried apricots and passionfruit syrup.

A surprising but pleasant lack of oak influence. Aside from bits of honey, vanilla, and nut, what I taste here are mostly distillery DNA flavors. I wonder if the barrel entry proof for this was low. And/or the cask was only low charred.

This is the first IB Tamdhu I’ve had, and I’m smitten. I’m partially convinced that Tamdhu’s distillate is just damn good. Edrington made a mistake letting go of this distillery. 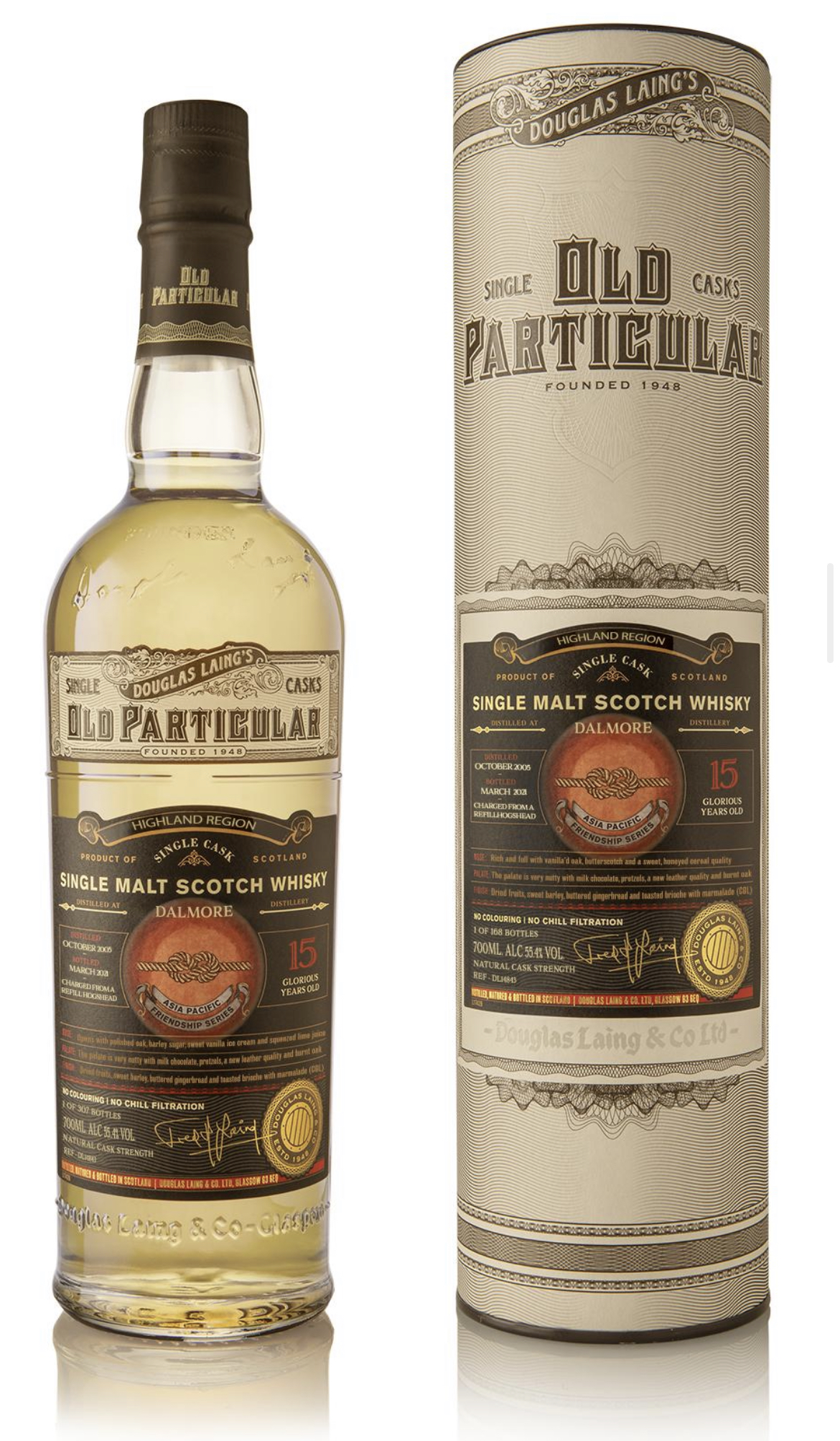 On the nose: A lot of incoherent baking aromas. I had to get through the ethanol to make sense of it. I get medium aromas of marzipan, vanilla-caramel, salted caramel, and honey. After some re-nosing, I’d sometimes get banana chips and butterscotch. Sometimes I’d get bits of semi-sweet and floral aromas like honeysuckle, honey, and lightly salted toasted coconut chips.

In the mouth: The ethanol bite here is much less than what you’d expect. I get medium tastes of salted caramel, honey, toffee, and butterscotch. In between are light flashes of waxiness, dried apricots, marzipan, and Mandarin oranges. A pronounced taste of Twix drizzled with cut-sized candied orange peels suddenly intensifies. There’s that lightly salted toasted coconut chips that end with a mix of lime and orange peels.

Full of very enticing flavors. I didn’t get any dull moments here. If you like the Tamdhu above, you’re sure to like this. This lacks the variety of fruitiness the Tamdhu brings, but there’s more variety in flavor due to the abundance of different confectionary flavors and it interacts with the fruits. In a blind tasting, I’d guess this to be in the 48% to 50% ABV.

Such a pleasant experience for my first taste of the independently bottled Dalmore. This has made me more motivated in searching for IB Dalmores. I’m much more disappointed in the distillery bottlings of Dalmore after trying this. 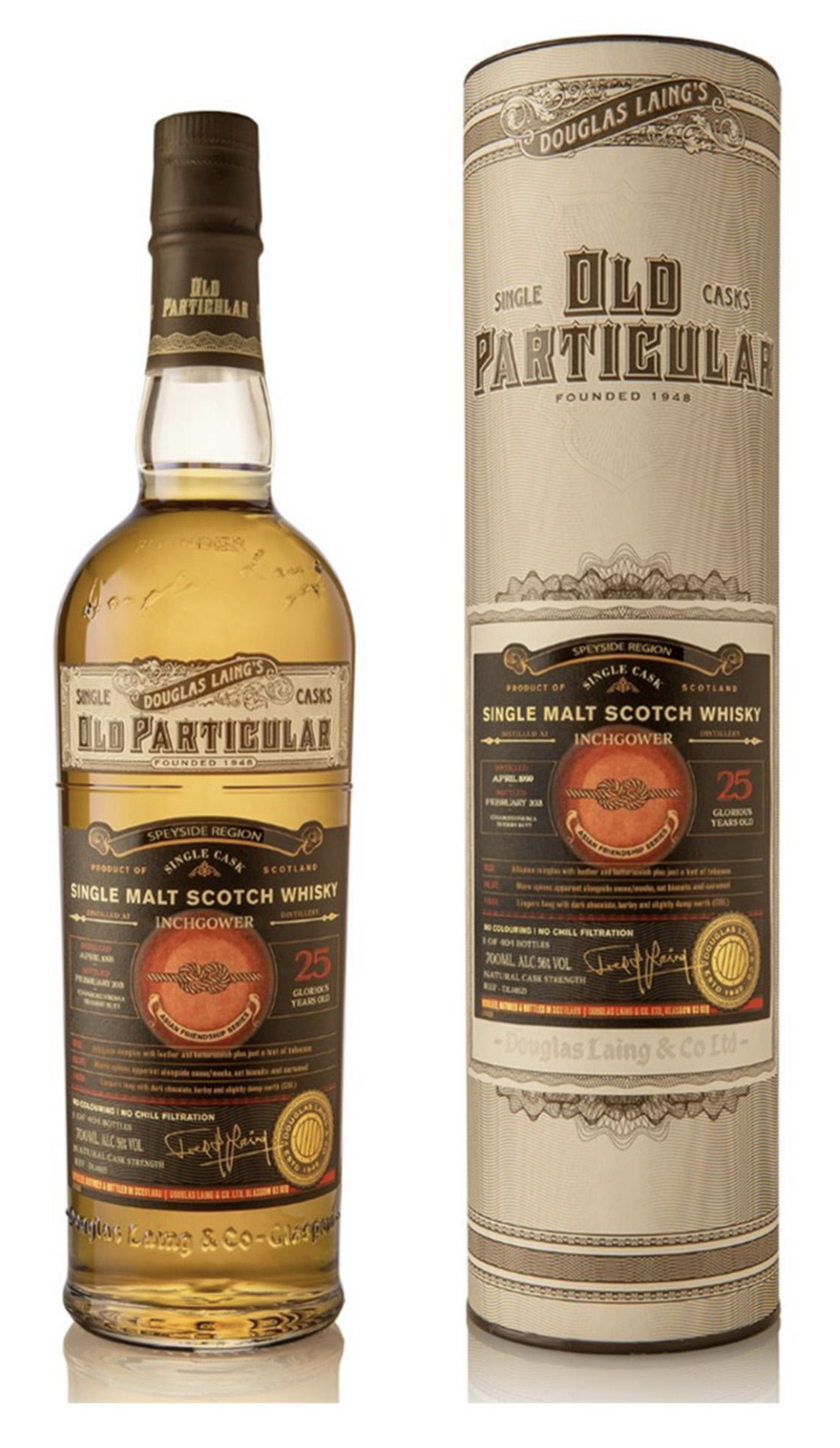 On the nose: Despite letting this breathe for 10 minutes, it’s still initially hot and peppery. The first layer ends with a mix of indistinguishable aromas of fruits and confectionery notes. It comes around again to give off pronounced but muddled and brief aromas of mocha, Twix, coffee grounds, gingerbread, and Taiwanese pineapple cakes. The lingering and enveloping heat is still a nuisance though. This third layer of heat also gives off subtle herbal notes which make me think of basil and peppermint.

In the mouth: As hot as what the ABV would suggest. I taste pronounced notes of mocha, coffee grounds, and gingerbread. There’s a brief and subtle taste of Taiwanese pineapple cakes, too. Another layer of notes comes out; it gives off tastes of baked pears, Twix, vanilla caramel and more gingerbread.

A bit reminiscent of the very few ex-sherry cask aged Glentauchers I’ve had, wherein the sherry influence doesn’t give off the typical chocolate, prunes, raisins and coffee flavors.

This is just an okay experience for my first taste of Inchgower. The impression this gave me is I haven’t missed out on a lot by ignoring this distillery. I guess it also makes sense that the geeky whisky folk I know haven’t recommended this distillery. Quite a shame to have taste a 25 year old single malt that’s not moving.

So far, this is the weakest Douglas Laing bottling I’ve had, but it’s still far from being a bad whisky. 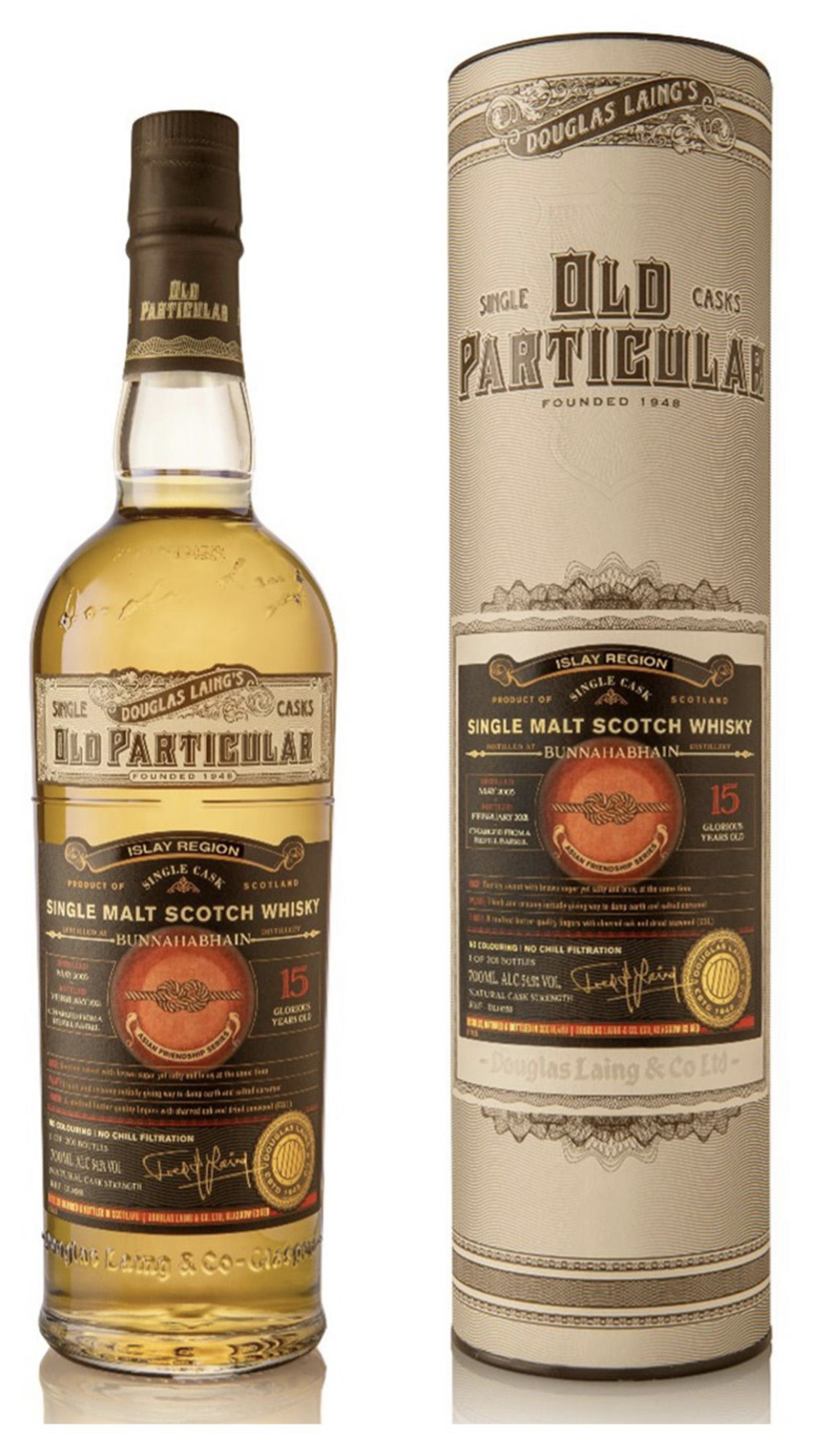 On the nose: The ethanol here is hot and peppery, but not as hot as the Inchgower. It really takes a while for heat to subside. Along the way, I get light aromas of saba banana peel, brown sugar, salted caramel, and orange-flavored candy. Like the Inchgower, the heat really gets in the way. Some sapodilla, guava, and herbs come out.

In the mouth: Really hot here as well. The burn makes everything taste obscured. Initially, I get light notes of orange peel, salted vanilla, brown sugar, and sapodilla followed by an oilier than usual texture. Later on, I pick up briefly taste notes that make me think of guava and a Japanese brand of green cup jelly from my youth.

The oiliness is probably the highest point of this whisky, while the persistent ethanol heat just obscures every note here. This is also the worst single malt bottling I’ve had from Douglas Laing. Then again, Bunnhabhain is just a distillery that never spoke to me. Even when it was touted by plenty of others as a good single malt, I never saw why. I feel the same for Bruichladdich. I guess the unpeated Islay single malts just aren’t my thing. So, I wouldn’t necessarily call this a bad bottling by Douglas Laing. 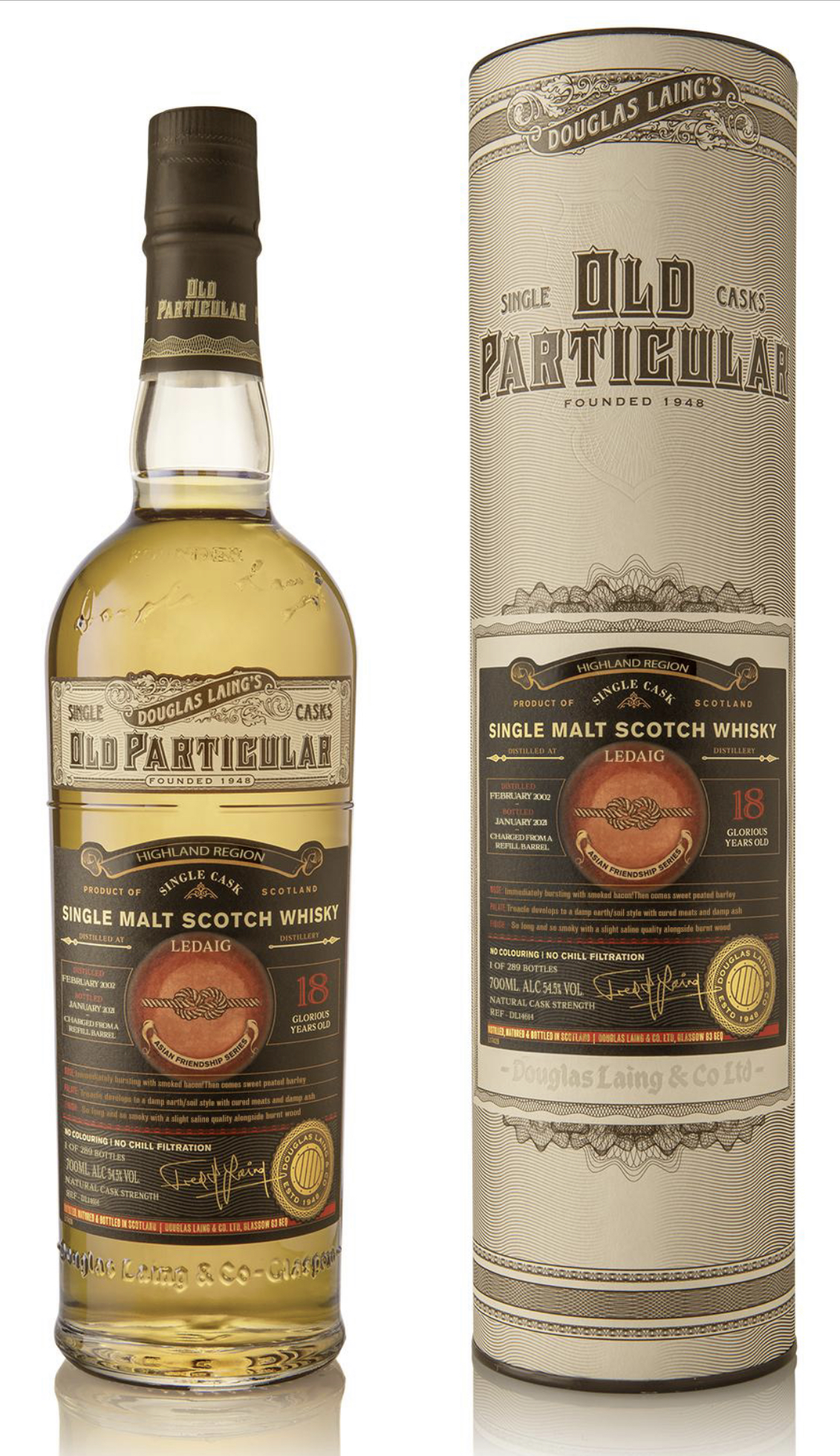 On the nose: A pleasantly warm, meaty, and smoky welcome. The peat is a mix of iodine, licorice, and confectionery. The peat and smoke is still very lively despite the age. Other 18 year peated single malts I’ve had are more nutty than peaty and smoky. It reminds me of Port Charlotte’s kind of peat. The strength of this peat and smoke is consistent all the way. It envelops the aroma of this whisky. Behind these are subtle aromas of patiently taking their turns. I get orange peel, vanilla beans, nori, salted caramel, toffee, and lemon peel.

In the mouth: A pleasant greeting of peat and smoke again. The peat and smoke are milder here. It doesn’t last as long as well. With the peat and smoke being less pronounced, I get medium tastes of licorice, toffee, nori tsukadani(Japanese seaweed paste), nutmeg, cloves, orange peel and vanilla.

The only other Ledaig 18 I’ve had is the distillery bottling with ex-sherry cask influence. It was less peaty and smoky. I’m sure the lower ABV and sherry influence muted the peat and smoke. Thus, it’s not a direct and fair comparison to this.

This is a treat for me as old peaty single malt are hard to come by these days. They’re usually quickly snatched up while they’re affordable, then end up in the secondary market for a stupid price. It has made me forget how good the (usually) less peaty and smoky single malts can be. With the more subdued peat and smoke, it’s easier to taste the other aspects of the whisky. How the peat and smoke has evolved is also nice to see.

I’d gladly buy a bottle of this. The much more lively peat and smoke, plus the gentle ethanol bite, plus the pleasant and full flavors is something I can see myself enjoying for hours. Maybe with a cigar too.

All images were provided by Paul Wang of Douglas Laing.