I’ve been a close follower of Malt since its inspired reincarnation with input from Jason and the wider team. I enjoy the non-fussy approach and their honesty. Malt has such a democratic feel that I thought I would attempt my own article!

This is rather a counterpoint to Adam’s recent cautionary article and spurred on by the observation that regular visitors to Malt are dismayed at the seemingly low score of six given to some prominent releases. Let’s not mention the 3 for a Springbank that resulted in fans of the Campbeltown distillery reaching for their pitch forks. Rather, the focus should be on the interesting observation in the recent Whiskybase interview that a 6 on Malt is the equivalent of 80 on their site. I’ve not prepared a bell curve for the Malt scores, but it would be interesting to lay that over a similar curve from other whisky writers.

Consequently, 6 or 60% may seem mediocre in the world of bombastic superlatives we read on the labels. A 6 is a respectable 2:1 at University, and a B at A Level. It’s congratulations cards and proud parents… right? It seems a shame that often, it’s not good enough for whisky fans.

For me, a 6 is most easy to accept in whisky under £100, and a delight in whisky under £50. Although budgets vary, it’s firmly in the drinking territory of most Malt readers, given the recent Instagram poll. A six suggests some compromise between elusive and expensive perfection and accessible and affordable whisky. Some excellent examples are the recent Kilkerran the Glendronach Forgue and the SMWS 7.196 Longmorn reviews.

A six should be a pleasure to drink, from any shape of glass. I recently shared round a 20-year-old Glenrothes in the bottom half of Coke cans at a rather arty party at 3 am. A six will not be so spectacularly complex that you can only truly appreciate it in a specially created flotation chamber after a four-hour ritual of preparation. You should be able to pour a large measure of a 6 for someone that is ‘not that into whisky’ and watch them enjoy it… or pour yourself one last large measure when you know the sensible thing to do is to go to bed.

Sixes should not find themselves hunted to extinction by auctioneers.

For this review, I chose to pick out something that has not been reviewed before, a Tomatin from their Whisky Meets Sherry series, where well-aged oloroso and PX casks from Bodegas Tradicion (30 and 20-year) are used to finish 10-year-old bourbon cask Tomatin for a further three years before bottling at cask strength in 2015. These whiskies were presented in half bottles along with another half bottle of the sherry from the specific cask. Bottled exclusively for Oddbins in 2017 and a sizeable outturn of over 700 ½ bottles. It has languished on the shop shelves, and I have witnessed it die at auction. Oddbins are now splitting the sets, so you can buy single half bottles of the Oloroso or PX when you find it for just £25. This really is a gem of both price and quality.

On the nose: an initial puff of spirit quickly followed by deep rich sweetness; warm dates; ginger loaf, and then light citrus and distant peach.

In the mouth: sherry—distinctly good sherry—and an alcohol burn; some maltiness, and a nutty finish. The full-strength spirit cuts through the richness of the sherry nicely. There is a gentle bitterness on the finish. A decent slug of water greatly improves both the nose, mouthfeel, and finish. Tongue-suckingly delicious.

This dram is a lesson in good sherry and decent whisky being brought together for the right amount of time (though the PX is perhaps a little over-long). It’s not multi-dimensional; the spirit does not sing through the sherry and elevate it to another level. This is a respectful 50-50 marriage of flavours. It’s keenly priced tasty stuff, and a well sized bottle for an experiment too. I understand the last few bottles are still available. 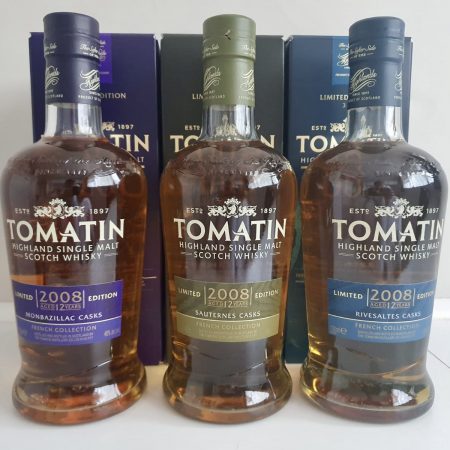